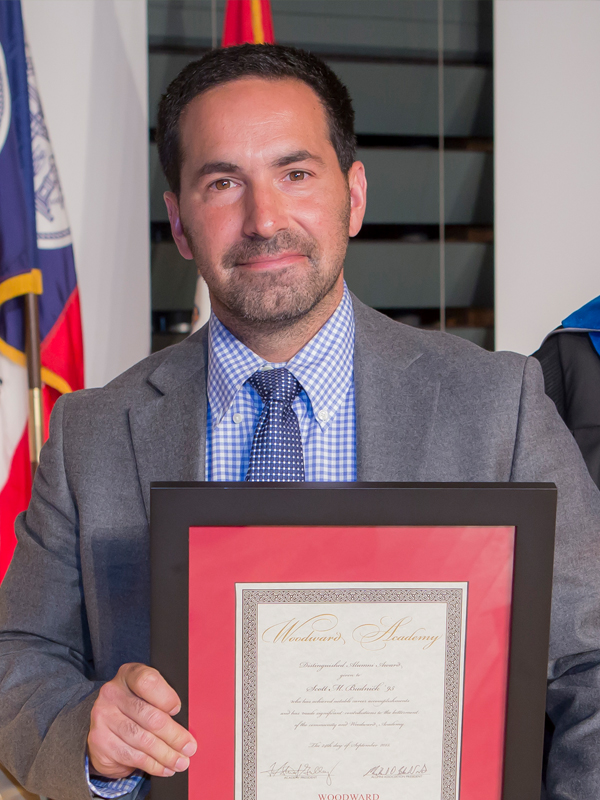 When Scott Budnick entered Woodward as a freshman, the Academy only had four short years to make an impression and provide the prolific opportunities that would pave the way for his future. Part of Scott’s student experience was organic; for instance, he acquired a cadre of friends he describes as truly diverse. Another part can be attributed to his innate drive and an environment that welcomed entrepreneurship—allowing Scott to start a business during his sophomore year as as a disc jockey for weddings and parties after War Eagle football games. However, it was an opportunity during his senior year that truly uncovered his path.

Scott had decided to pursue medicine after graduation when Woodward offered students the chance to be extras in a TNT miniseries about the Civil War filming in Atlanta. A busload of students, including Scott, departed campus and headed to the set on a Saturday. The students portrayed imprisoned soldiers in tattered uniforms, under the drenching force of a rain machine in freezing weather: a day’s work for $60. While his peers grumbled, Scott was captivated.

“I sat there and was mesmerized, watching the director on the crane swooping down with the cameras,” he said. “That was my first time being bitten by the bug. That was an experience I got because of Woodward.”

The impression had been made. Scott combined that experience with the discovery of his writing voice in English classes taught by teachers including Lucy Klein and went to Emory University to earn a degree in business and film. He interned with Warner Brothers, the 90s TV show “Baywatch,” a talent agency, and with the casting director from the TNT project that originally sparked his interest in the industry. After a period of post-grad struggles, he was hired as an assistant on the movie “Road Trip.” This led to a working relationship with director Todd Phillips that, over 14 years, resulted in 11 comedies, including “The Hangover” series and “Project X,” on which Scott served as executive producer.

Scott had a heavy hand in the casting, editing, budgeting, and marketing—and especially the writing—of beloved box office hits. Though he admits to rarely being starstruck, the allure of the film industry is undeniable. Yet while working on “Starsky and Hutch,” Scott found a very different calling: juvenile justice reform.

“I met another producer who said, ‘I teach a creative writing class down at the local juvenile hall . . . will you come be a speaker in my class?’” Scott said. “I sat with kids who had committed some serious crimes. I remember on one side of me there was a 15-year-old who had just been sentenced to 300 years in prison.”

That day Scott learned the teenager had been a gang member; he was sentenced for standing next to the person who committed the shooting. The victim was in and out of the hospital within a day. “In my own moral code, I didn’t think that was right. I understood that all kids have the ability to change. We all know who you are at 15 is not who you are at 25. It’s not who you are at 35. It was something my heart poured out for,” he said.

Scott founded the Anti-Recidivism Coalition (ARC) in 2013, becoming an advocate in an arena where there are few. From creating legislation that ensures the possibility of parole for young offenders to providing mentorship programs, the ARC offers support and advocacy for people who were under 18 when they entered the criminal justice system. Membership in the ARC numbers at 230 formerly incarcerated individuals, including many who are now successful in higher education or in solid careers. Three of the members now practice medicine.

Though the ARC is California-based, its work is on track to spread nationwide, as a bipartisan push for U.S. prison system reform is beginning to emerge. Scott serves on the board of President Barack Obama’s foundation, My Brother’s Keeper, an initiative to connect young men to the mentorship, education, and networking opportunities that lead to successful lives.

When it comes to Scott’s success beyond Woodward in film and juvenile justice, he “never thought either of these would have been [his] worlds.” However, in taking heed of the importance of relationships—a value Scott notes that he learned at Woodward—he has found an ideal space to both entertain and uplift our society and plans to shift to making films that tackle important issues facing society. The work is not easy, and oftentimes, the moments that keep Scott on this path are small though profound.

“I remember [a teenager] calling me from court to say he was sentenced to life. I went to the juvenile hall at 9 o’clock that night to sit with him, and I didn’t know what to say, so I asked the chaplain what to say to a 16-year-old who just got life without parole,” Scott said. “The chaplain said, ‘It’s not what you say. It’s about the power of presence.’”