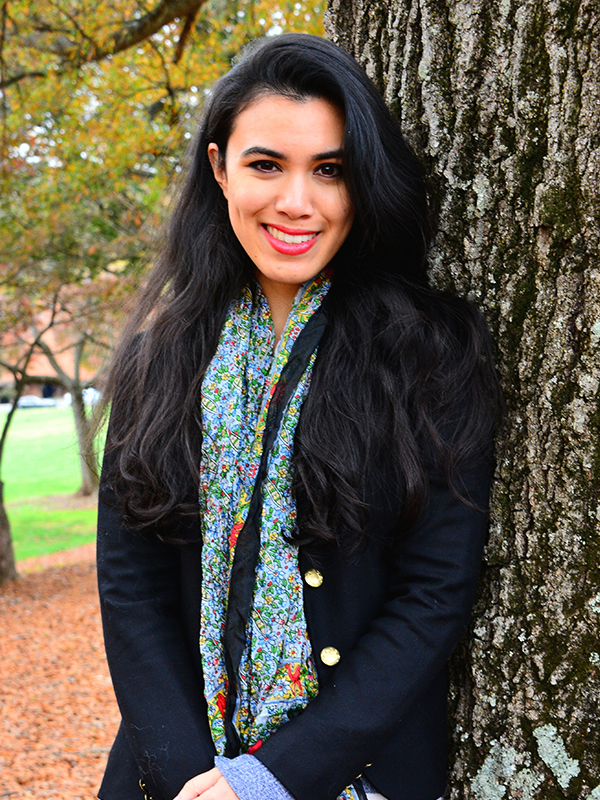 Anyone who knew Roshani Chokshi ’09 as a student would expect great things from this highly motivated young lady, but even her most ardent supporters would be amazed at the speed of her success as a published author.

At barely 25, Roshani could easily pass for a heroine in a teen fantasy novel. Instead, this dark-haired beauty toiled endlessly to complete her own fantasy novel, and, with a tenacious spirit and fierce determination, she navigated the labyrinth of the publishing world to find a home for “The Star-Touched Queen.” With its foundation culled from mythology, Roshani describes her book as a retelling of familiar stories set in a new world.

Roshani, who graduated from Emory University in 2013, began writing as a pre-teen. “Woodward had the best library ever,” she recalls. “I remember the one in the Lower School. They had shelves of mythology, and I would check out all of them. The reading curriculum was fun, and it was taught in a way that was accessible. It really gave me the foundation for writing.”

Roshani began her love affair with mythology long before her days in the Lower School. She is a perfect blend of her parents’ Indian and Filipino heritage, and Roshani suggests that her love of mythology stems from that background. “My mom and dad gave me original versions of ‘Grimms’ Fairy Tales,’ Hans Christian Andersen, all of Andrew Lang fairy tales, and world mythology, because they didn’t teach me either of their languages. I needed world fairy tales as a way for me to get in touch with both sides of my heritage.”

In Middle School, Roshani’s writing style blossomed. “Ms. [Dee] Koscik changed everything. She was the first one who believed in me.” In Upper School, Roshani was a fixture in the student publications office and served as editor of the Blade newspaper and the Silent Voices literary magazine.

“I loved the newspaper and the literary magazine, and the publications office felt like the heart of the school in many ways.”

Roshani believes that her Woodward education not only provided a strong foundation, but also truly fanned the flames of her passion and skills for storytelling.

In Scott Crook’s English class, her imagination was captured by a quote from Milton’s “Paradise Lost”—“I would rather reign in hell than serve in heaven”—as well as class discussion about the myth of Hades and Persephone, the young woman dragged to the Underworld and condemned to spend half a year in hell after eating six pomegranate seeds. Coach Crook pushed the question of who Persephone was. “What if she didn’t want to return [above ground]? What if she was very excited about being queen of the Underworld?” said Roshani. The class made her think about the “kind of girl who would choose something that is seen as so dark and say that it is powerful instead.”

While “Star-Touched Queen” connects to several stories from mythology, it also reflects Roshani’s hopes to see more diversity in young adult fiction. “I never really saw any stories with people who looked like me or anyone in my family,” she says. “I wanted to write a heroine who felt very familiar to me in the context of fairy tales and stories that would be familiar to anyone. ‘Star-Touched Queen’ is not very original. It’s ‘Beauty and the Beast,’ but I’ll bet you haven’t seen it in that setting.”

The tale of 17-year-old Maya and her cursed horoscope begins amid the sumptuous streets of India but quickly crosses into magical bazaars where buyers might purchase “dreams, or a garland of nightmares.” Although the book is categorized as young adult fantasy, its message appeals to readers of any age. “I think that the main theme of the book is how to interpret the things that happen to you. My dad always says that you can’t control the actions that affect your life but you can always control your reactions. I would hope that is what readers take away from the book. It’s about self-affirmation. You have to believe in yourself first before anyone else will do that for you.”

The idea for the book started during Roshani’s undergraduate classes at Emory. She wrote her senior thesis on 14th century Breton lais, recitations or songs that included supernatural elements, mythology, and Celtic themes of faeries and enchantment. In her thesis, she traced the origins of three tales in Medieval literature to their Celtic inspiration and then all the way back to their Greco-Roman roots. “It was one of the things that got me thinking about how we are just telling the same stories over and over again,” Roshani said.

Between her Emory graduation and the start of law school at the University of Georgia, Roshani put the finishing touches on the book. After numerous rewrites and more than 300 queries to potential literary agents, she remained confident. “I got a rejection from an agent. The notes in her rejection were so nice that I thought ‘maybe you didn’t really hate it,’ so I asked her if I took her notes and revised it, could I send it to her again.” Just three weeks later, Roshani received an offer of representation from Thao Le of the Sandra Dijkstra Literary Agency, which represents authors such as Amy Tan, Maxine Hong Kingston, and Lisa See. Working with her agent, Roshani continued to revise her novel, and then began the process of submitting the manuscript to publishing houses.

“Over six months, I got more than 20 rejections. I took a good long look at my manuscript and at those rejections and decided I needed to change it all over again, so I rewrote the book in February 2015. I changed it from third person to first person, took out characters and subplots, and streamlined the whole thing. I broke my wrists doing it, but it was fine because I really believed in it. When we had the revised story, some magic must have happened because a month later, on March 18, we had an offer from St. Martin’s Press and a couple of other publishers. Then I had a book deal. It was absurd!” But the editorial process doesn’t end there. “Once you sell and once you sign the contract, it’s not in your hands at all. You start the rewrites all over again.”

Roshani feels one of the most important pieces of advice she has heard “came from Neil Gaiman who said ‘write things and finish them.’” Her writing routine, which generally takes place while wearing pajamas, involves two-hour time slots during which she puts her phone on do-not-disturb, turns off everything on her computer screen except her document, and focuses. “I put on my noise-canceling headphones. I write. I think the important part about those two hours is never to self-edit. I don’t reread the paragraph. Once it’s done, once I hit period, that’s it.”

“When I am writing, I also take time out of the day to read other stuff.” She encourages writers to “read books that make you itch to write. If you read something and you don’t have a pen and paper beside you, and it makes you furious, then you know you have found one of those books that you just return to over and over.” Her favorite authors include Laini Taylor, Catherynne Valente, and Vladimir Nabokov, to name a few. “I love authors who spend a lot of time on the sentence level, and I love authors who spend a good deal of time on their world-building.”

An as-yet-untitled companion book to “The Star-Touched Queen” is set to be released in spring 2017. “It’s about a very dangerous otherworldly tournament.” Roshani also is working on a heist story that takes place in Paris during La Belle Epoque, which means the beautiful year. “It’s [a time period] when the world was holding its breath and everything was glamorous before the terrors of World War I. It feels like an otherworldly time.” Although set in Paris, this novel draws on her Filipino roots with connections to the Spanish colonization of the Philippines.

To learn more about Roshani and her books, visit www.roshanichokshi.com. “The Star-Touched Queen” will be available at bookstores and online beginning April 26.