A Conversation with Chaplain K 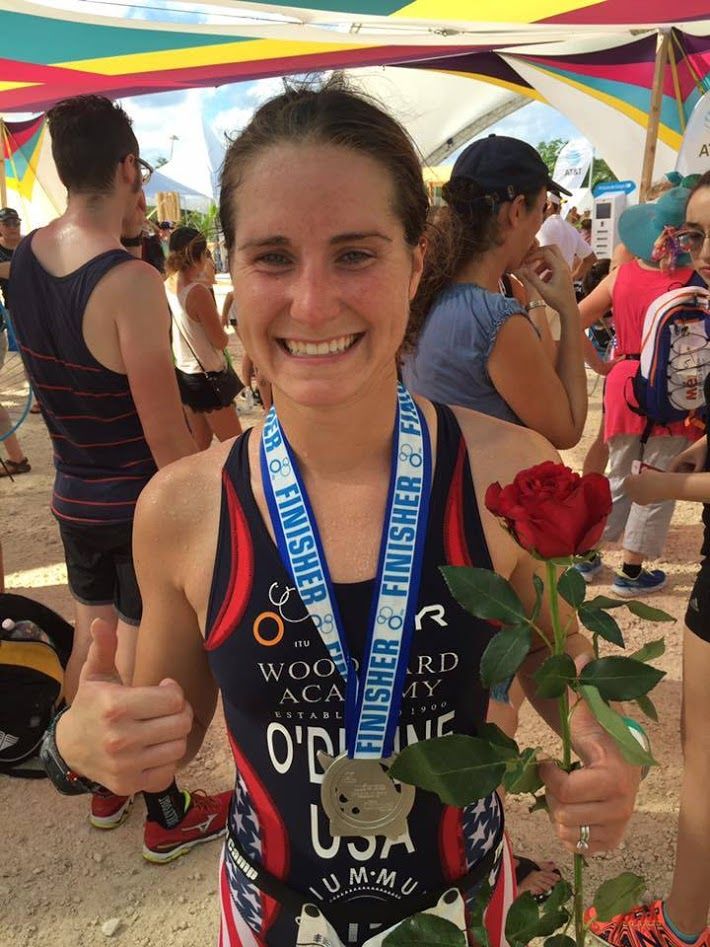 Woodward is so proud of Chaplain Katie Kilpatrick, who is a model of grace and kindness for students as well as a champion triathlete in her spare time. Beyond the Gate caught up with her about her recent race in Mexico.

Beyond the Gate: Tell us about the race you competed in recently. Can you break it down for those of us who don't know about triathlons?

Chaplain K: In September, I had the pleasure of competing in an International Triathlon Union (ITU) race called the Sprint World Triathlon Championships in Cozumel, Mexico. These short-course triathlons consist of a 750-meter swim, 12-mile bike, and 5K run. These are the shortest types of competitive triathlons, but they are marked by unique challenges. The race is incredibly quick, and you essentially max out your heart rate for a little over an hour. You push as hard as you can on each discipline and work very hard to keep transitions as short as possible. Unique to ITU triathlon, the bike is "draft legal." This means that just like in pro cycling, you ride in packs and utilize each other for speed.

BG: How good do you have to be to even get to this level? How did you do in Cozumel?

BG: What was the course like? More or less challenging in any marked ways?

K: The course itself was fairly straightforward. The swim was in the ocean, which allowed for a fair amount of buoyancy, but there also was a slight current. The bike was completely flat and only one loop. ITU races tend to have multiple loops, so this was a nice change. The run was the most challenging. The heat of Cozumel was almost unbearable, and the course was actually more than 0.1 miles too long. In short course time, this is quite a bit when you are going as fast as you can. At the same time, the setting was absolutely beautiful.

BG: Was there a time during the race that was particularly physically or mentally grueling? How did you get through?

K: I was very nervous about the bike leg. Drafting requires a great deal of communication, and most individuals out on the course were speaking different languages. This was incredibly new to me. However, it was amazing how we ended up being able to notify each other of positions even just by the tone in our voices. The run also was incredibly grueling, but it's also my strength. I did my best to push through the heat. I ended up playing games in my head--doing anything to just get to the next person and the next person. Hydration made this particularly difficult, as they handed us pouches of water instead of cups. The pouches kept exploding on me when I tried to drink them!

BG: Was there a time when you felt really great or on top of your game during the race? Can you describe that feeling?

K: I always feel on top of my game during the run, and this race was no exception. I was struggling from the heat but was able to make up a great deal of time. The swim tends to be my weakest, with the bike as a strength, and the run as my biggest strength. It really felt as though I was racing and had the chance to continue to catch individuals.

BG: How did you train for this incredible feat?

K: I essentially train and race all year long. I started training for this season last November and began racing in March. Each weekday consists of early morning and late evening workouts, with longer workouts reserved for weekends. Before heading to Woodward in the morning, I typically complete an interval bike or run, and then follow up with a swim/strength workout in the evening. Saturdays, I spend multiple hours biking and practicing my speed running off the bike.

BG: How did you start competing in triathlons? Have you competed in a lot of these kinds of races? 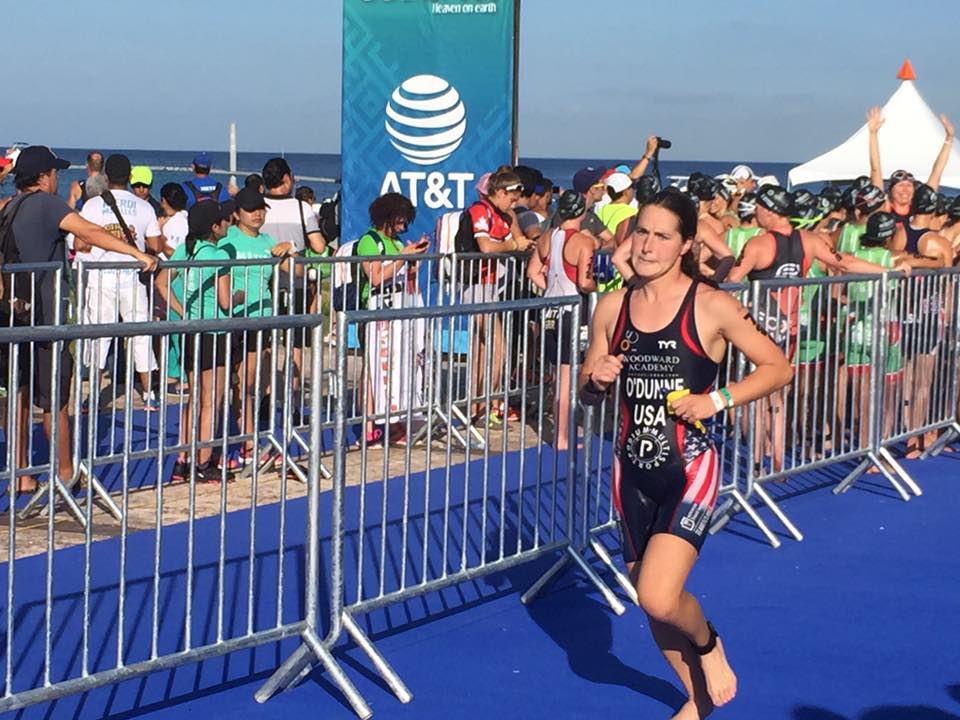 BG: What's it like being part of your team and representing the U.S.?

K: Being a part of a team completely enhances the experience. Locally, I race for Team Podium (affiliated with Podium Multisport, a triathlon store near Emory). I love this team and had so much support throughout this process. Competing for the USA also is amazing. All of Team USA stayed at the same hotel in Cozumel and participated in various activities together. There is a definite bond out on the course. While I do not live close to many of these girls, we typically race together throughout the year at big competitions. On the national level, we are competitors. But on the international stage, we really came together on race day. We were giving "thumbs up" and encouragement to one another even during the pain of the race. It was a truly incredible feeling to have this amazing support. It also was just an honor to wear the USA uniform, represent my country, and hear the USA chants while I was racing. It really pushed me, since I wanted to make my country proud!

BG: What do you do after a big race like this? Eat a huge meal? Watch some movies and not work out for a little while?

K: After a big race, I usually take one day off and then head back to training. This race was a bit different. I've been battling a minor knee injury and decided to end my season a bit early with this race. I am taking two weeks off to fully recover and then will begin ramping back up for next year. Even after one day, I really missed it. However, the extra few hours of sleep are amazing!

BG: Any other races on the horizon?

K: Yes! I decided to take a year off from short course ITU racing next year to compete in my first Ironman. This is a completely different type of training and racing. I will race Ironman Lake Placid in July 2017, which consists of a 2.4 mile swim, 112-mile bike, and 26.2-mile run. I will be racing for a higher purpose alongside my husband and my father. We're racing for the triathlon's charity partner, the Multiple Myeloma Research Foundation. We are going to train, race, and raise funds for the next year as a family as we work to find a cure for this rare blood cancer that my mom is battling. She is an amazing, inspirational fighter. We want to help her fight and help her--along with other patients like her--find a cure as we take on this next year of training! I am incredibly excited to train for a cause so close to me over the next year with those I care about the most.

BG: Anything else you want to share about the experience or about how this part of your athletic life relates to your life at Woodward?

K: I feel so blessed each day to be at Woodward with students I love and care about so much. I feel equally blessed to participate in a sport I love so much. For me, they feed into one another. Triathlon is a very spiritual practice for me, and I believe it truly impacts my work as a chaplain. I completed my graduate research on the intersection between faith and endurance athletics. For me, these two disciplines are intricately woven in all that I do.