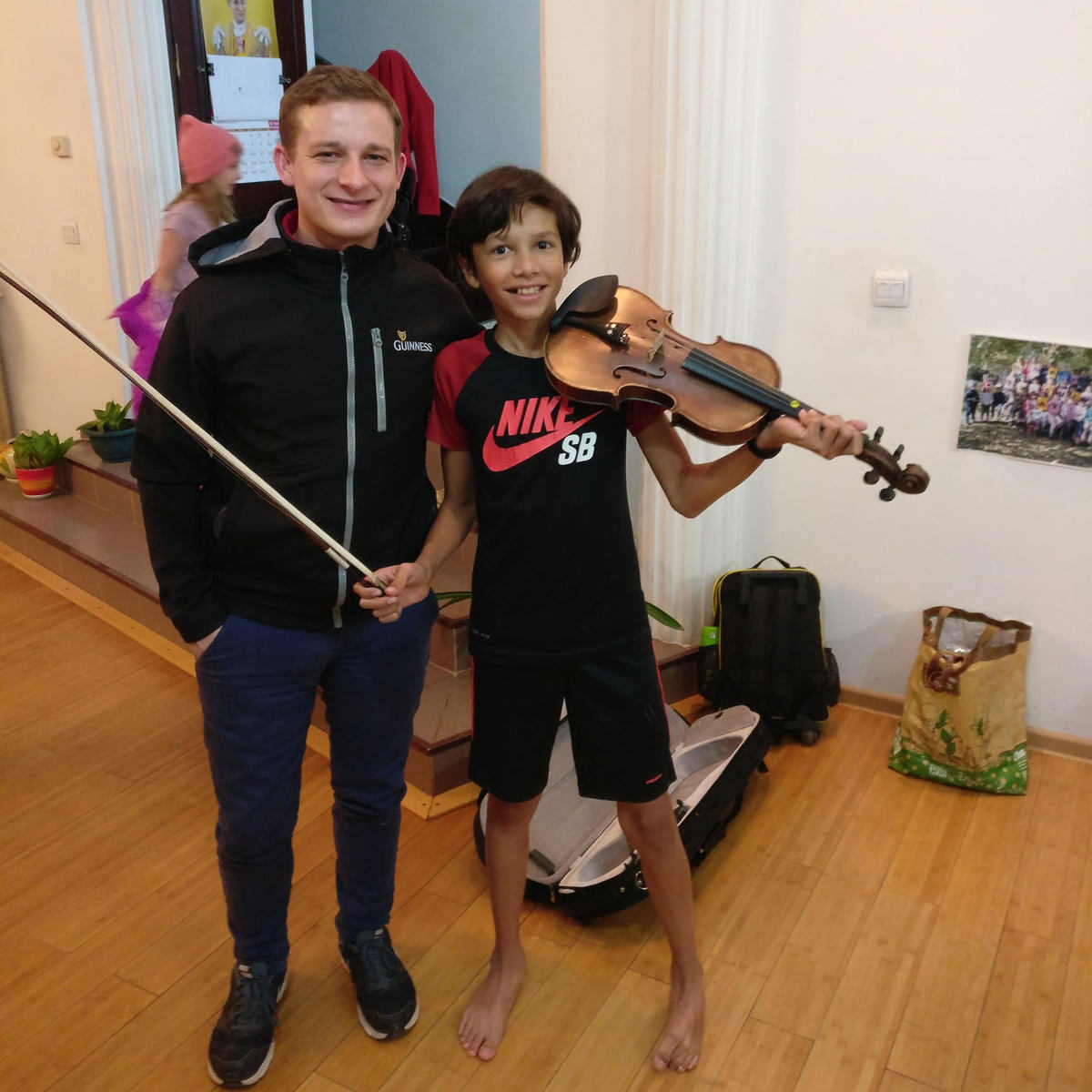 Lower and Middle School orchestra teacher Danny Bermel had an exceptional Thanksgiving this year; he traveled to Kazakhstan where he visited and lectured at the Almaty International School (AIS), as well as soloed in a performance of one of his original compositions. Danny's relationship with this school has strengthened his commitment to both teaching and music, and has made him keenly aware of the importance of global connections. Upon his return, Danny was kind enough to share his story with us:

I spent the week in Almaty, Kazakhstan at AIS, a school which is somewhat similar to Woodward Academy and a great school to partner with. As an international school, they have students from all over the world who speak many different languages. My relationship with them began two years ago around Thanksgiving when I was invited to play and teach in the international music festival for Central Asian Independent schools, which was held at AIS.

This time I was invited back when an AIS teacher, John Christian, found one of my original compositions entitled "Sunrise Over The Battlefield." He proposed an exchange in which we would come to each other's schools to perform and teach. This became a reality thanks to Mr. Phillips, our Lower School Principal and Ms. Spiller, our VP of Academic Affairs. Throughout the week, I gave demonstrations, conducted masterclasses, and taught lessons on violin, viola, cello, and bass, and I also played my composition with them at their winter concert.

Overall, the experience was incredible. It warms my heart to see the power of music around the world. Two years ago, a student named Jed decided to play the violin after I gave him a lesson. He now plays in the Middle School orchestra, and this trip I was able to continue to build my relationship with him and his parents. I can't help but think, Wow, this kid halfway around the world decided to play because he was introduced to the violin and inspired by seeing me play years ago. I hope to keep in contact with him and other students at the school, and I plan to have our students skype with Almaty as part of our exchange. Mr. Christian may also come to visit Woodward again to spend some time with us as well.

My biggest takeaway from this experience was the importance of an open mind. It amazes me how hard some of the AIS students worked with somewhat few resources, and the musical end results were amazing too. The trip renewed my sense of responsibility to the teaching profession and inspired me to be thankful for all of the wonderful things I have been blessed with, not the least of which are my students at Woodward Academy.

Share to FacebookShare to TwitterShare to LinkedInShare to EmailPrint this page
Danny Bermel, LS and MS orchestra teacher
Dec 5 2017
Share to FacebookShare to TwitterShare to LinkedInShare to EmailPrint this page
Beyond the Gate: The Woodward Academy Blog is a gathering place for our community members to share all of the remarkable things happening at Woodward in the classroom and beyond. Our talented faculty and staff will share their ideas and philosophies as well as news about the programs and activities that make the Academy special. We’ll also hear from students, alumni, parents, and other members of the War Eagle family. We invite you to explore and share your comments! Would you like to be a BTG blogger? Email marcom@woodward.edu.
Recommended Reading from our WA Librarians
Urban Recipe and Woodward Combine to Feed Those in Need
1 Day for WA: Alumni Rally to Support our School on Graduation Day
Woodward Alum Fights on Pandemic Frontlines
Congratulations to the Woodward Academy Class of 2020!
#woodwardway
Social Stream