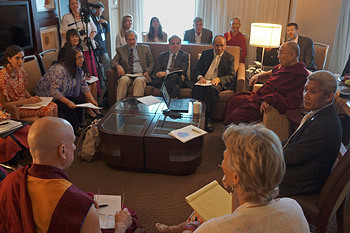 Upper School art teacher Jennifer Knox '95 traveled to India in the spring and to Indianapolis in the summer as part of a group working with with the Dalai Lama on the Emory-Tibet Partnership's K-12 Secular Ethics in Education (SEE) Curriculum.

Jennifer began her work with the Emory-Tibet Partnership in 2012 when she took a course in Cognitively Based Compassion Training (CBCT) from Dr. Lobsang Tenzin Negi, director and co-founder of the partnership. A former monk, Geshe Lobsang received his Geshe Lharampa degree, the highest academic degree granted in the Tibet Buddhist tradition, at Drepung Loseling Monastery in south India before completing his Ph.D. at Emory. "My personal experience with CBCT was profound, provided innumerable skills, and prompted many positive changes in my life," Jennifer said.

She became a certified instructor and taught CBCT to students at Emory, elementary and middle school teachers in the Atlanta Public Schools, and parents of small children at the School of Human Ecology at the University of Wisconsin, Madison.

In fall 2015, the Dalai Lama requested that the Emory-Tibet Partnership create a framework for secular ethics in education. Dr. Negi approached Jennifer and the partnership team with the task of leading local educators in envisioning a K-12 curriculum. In April, a team including Jennifer, Dr. Negi, and cognitive research scientist Michael Romano, presented the a 330-page report to the Dalai Lama and his advisors, who were impressed with the results and have now asked Emory to proceed with further development of the content.

"Traveling to New Delhi for the meeting with the Dalai Lama was a great privilege," Jennifer said. At the meeting, the team heard feedback from educators from a variety of Indian schools (both public and private) who introduced some of the competencies from the Secular Ethics in Education draft curriculum in their classes as well as from scholars who reviewed the document.

Beyond the Gate spoke with Jennifer to learn her personal impressions of the experience.

What were your feelings and perceptions on meeting with the Dalai Lama?

In addition to presenting to the Dalai Lama, I also had the opportunity to have lunch with him along with a handful of individuals from India and abroad. The Dalai Lama is personable, humble, and shares jokes generously! His laughter is contagious, and his presence warm and inviting to all. We spent the lunch laughing with him, listening as he shared a positive update on his health (he is currently undergoing radiation), and talking about the state of education and its importance in bringing unity to humankind.

In a report on the meeting, the Dalai Lama states that the long-term purpose of the meeting is to examine ways of creating a more peaceful world through education and awareness. What are the next steps for the partnership?

So often we place the blame on others as enemy, but the Dalai Lama suggests that rather than individuals it is anger and hatred that are to blame for unrest. The Dalai Lama and his advisors are asking for Emory to proceed with further development of the content of the K-12 curriculum framework. Advisors from many of university's schools are supporting this commitment by Emory to create a center devoted to the development, training, and scientific research of Secular Ethics in Education (SEE).This summer, I will be joining the core SEE team in facilitating a group of educators to continue to develop the K-12 curriculum framework. Our team will be traveling to Indianapolis to meet with the Dalai Lama, who will be presenting to a gathering of mayors from around the United States who have signed the Charter of Compassion to discuss SEE. Also, an essay on secular ethics is included in the 2016 United Nations World Happiness report. Its inclusion in the report suggests the momentum that is building around this theme and speaks of the urgency needed to address it on the global scale. We see our work as a small contribution to a worldwide effort to educate both the mind and heart.

Character and service are integral to Woodward's identity. As an alumna and an art teacher in our Upper School, how do you think well do you think we are doing in teaching compassion?

Our global community and the ways in which we communicate with others and ourselves have changed tremendously since I began my schooling at Woodward. As a visual arts instructor for a decade here, I have noticed that students have shifted in their relationships to themselves. Students now have access to the world through their devices, and this has provided opportunities for tremendous growth, but it also has conditioned them to look outside of themselves for answers. Along with my exceptional colleagues, we spend a great deal of time deliberately creating a community of trust with our students in the Upper School Visual Arts Department. This is achieved by skillful means and also by intuitively seeing each child as a manifestation of many contributing factors—in other words, with compassion. This trust and acceptance of our students enables them to relax and to begin to trust their own capacities of critical thinking and problem solving. Character and service are core to our experience at Woodward. This orientation toward self-development and service to others signifies a strong commitment to providing opportunities for growth in these areas for students and the broader community. By continuing to support the development of both heart and mind, the possibilities are limitless.