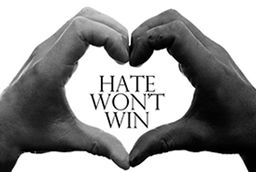 On June 17, 2015, Alana Simmons was driving home when she got a call from her father. She pulled over, and heard the words that forever devastated her family: "There has a been a shooting at your grandfather's church."

Alana is the granddaughter of Rev. Daniel L. Simmons Sr., who was brutally gunned down along with eight other worshippers at "Mother" Emanuel AME Church in Charleston, S.C., by 21-year-old white supremacist Dylann Roof, after welcoming Roof into their Bible study.

During the Academy's Week of Understanding March 27-31, Alana shared her story with fourth through sixth graders at the Lower School. She told them about the awful night of praying continually while waiting for news of her grandfather. At 5 a.m., her family learned he did not survive. "When we heard what happened, we were devastated," she said. "When we heard why it happened, we were even more devastated."

They learned Roof wanted to start a race war. At a bond hearing, family members of victims stood and, remarkably, offered forgiveness instead. When it was her turn to speak, Alana said, "It is my understanding that the purpose of this shooting was to initiate a race war. And although my grandfather and the other victims died at the hands of hate, they lived in love and they preached love, and their legacies will be love. This display of forgiveness by the families and their plea for mercy on your soul is a true testament to how they lived, and so hate won't win."

Hate won't win. Those three words became a rallying cry. They went viral on social media and dominated news coverage, becoming a movement devoted to creating and sustaining an equitable society for people of all races, religions, social classes, and orientations. Now a nationwide effort, Hate Won't Win focuses on initiatives to eliminate the tensions that are destroying communities and challenges followers to show an act of love to someone of a different race, religion, or economic class and post a picture or video to social media with the hashtag, #hatewontwin.

Alana encouraged Woodward students to spread the message. "Go out into your communities... and I want you to show an act of love to someone who is different from you," she said. Lower School Principal Andy Phillips echoed her words, urging students to reflect the Hate Won't Win mission in their own lives. "The Week of Understanding doesn't need to be a week," he said. "It needs to be a lifetime."