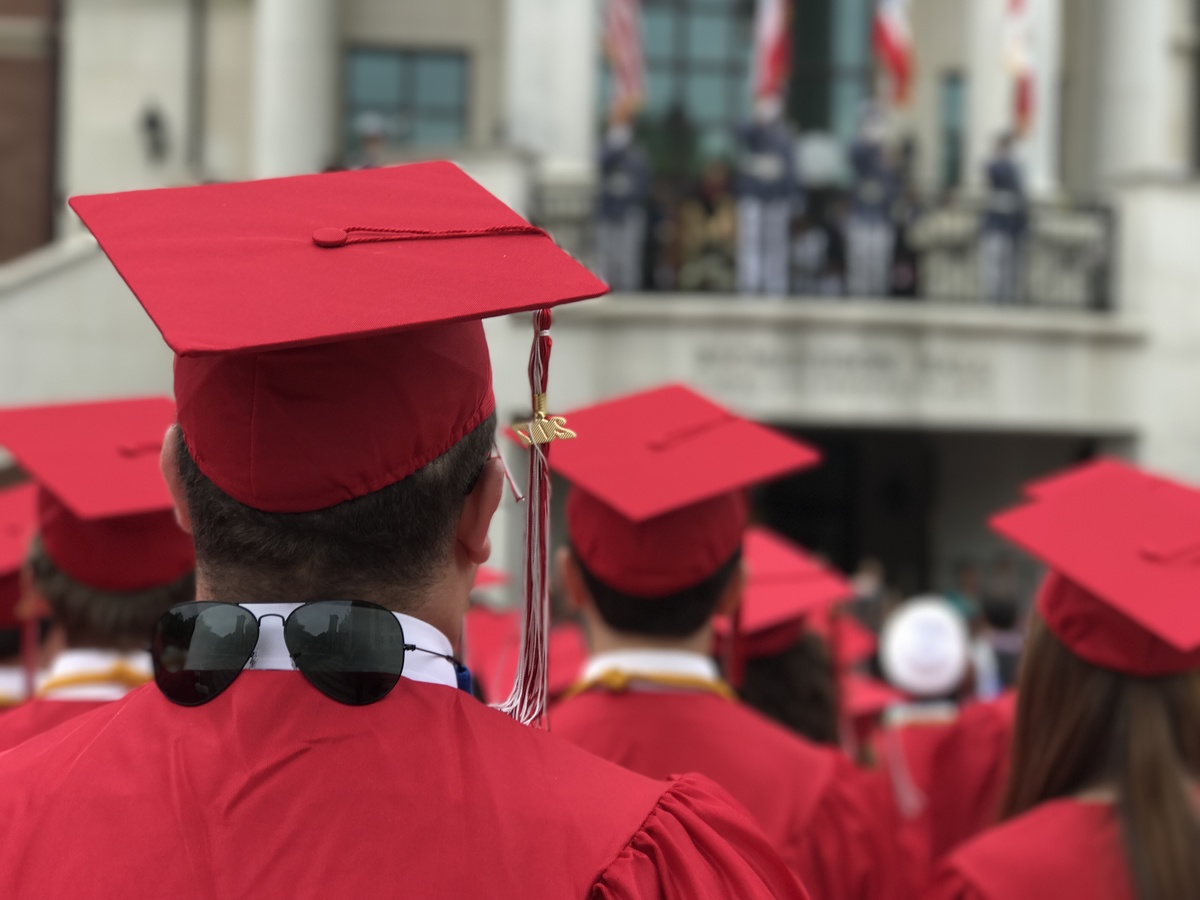 Commencement on Saturday featured so many wonderful moments (scroll all the way down for a slideshow of some of the best photos from the day), but one of the most meaningful and poignant was the student address from senior Brennan McDaniel. We've included a video of his speech as well as the text. Enjoy!

"Good morning Woodward family and friends. My name is Brennan McDaniel, a member of the Class of 2017! Before I begin, I would first like to thank God for putting me in this place at this time. What a blessing it is to be here today with all of you. Next, I would like to thank all of the teachers and staff for upholding the traditions of Woodward Academy and for preparing us for success here and beyond. I also want to thank each of you for coming and supporting us as we graduate and move on to the next phase in our lives. And, of course, it's only appropriate that I thank my 2017 Woodward Academy classmates for making this year an amazing experience! Finally, let me take a minute to thank my parents and my little sis whose steadfast support and encouragement have held me up through thick and thin.

As we, the Class of 2017, leave the walls of the Academy, it's important for us to remember the words of President Gulley, "In life, we are sometimes led to places, people, and experiences that are unexpected and prove to be truly transformative." For me, like President Gulley, this describes the experience of my coming to Woodward Academy. So to begin I would like to share with you a quick/brief story.

To paraphrase James Baldwin, the American novelist, playwright, and social critic, "Most of the Americans that I have ever encountered truly have nothing against other people. That's really not the question. It's really about apathy and ignorance. You don't know what's happening on the other side of the world, because you don't want to know."

What many of you may not know (and that I sometimes forget), is that I have only attended Woodward for the past two years. Prior to that, I attended a private Christian school in the northern suburbs of Atlanta since the sixth grade. It was a school that both my parents and I chose based on the religious component and its academic rigor. I was very excited to attend and to be quite honest, for the majority of my time there, I felt good about my place in the school.

Despite this initial comfort, however, early on things began to change in a way that I could not put my finger on. There was an undercurrent that was playing out that I couldn't entirely grasp but that I knew was there. As guys we told crude jokes and said stupid things, but as the only black boy in my grade I was sensitive to the fact that at times the comments were simply racially insensitive. As the years went by, either the jokes increased in number or I took them more personally—maybe both.

The ironic thing throughout these episodes was that my classmates wondered why I didn't find the jokes as funny as they did. Here is where James Baldwin's message applies, "Most of the Americans that I have ever encountered truly have nothing against other people... It's really about apathy and ignorance." You see, my classmates were not bad people; they simply felt it okay to share these types of jokes because, according to them, I was somehow different from their impression of other black people; although most of the blacks that I know and who are in my family are generally like me. But what confused me most was that in my eyes, my "friends" and I were so much alike. We shared similar interests, socioeconomic status, exposure, and spiritual beliefs. After all, I had spent so much of my life learning how to interact with people who were different than me. I just could not understand why, underneath it all, my skin color still ultimately made me so different from them. And they didn't seem to understand that.

This experience changed me in a way that I think will affect my perspective on the way people see one another—or, rather, don't see one another. Ultimately, I knew I had to make a change so that this situation wouldn't change me on a deeper level. So, what does this have to do with Woodward Academy? Well, after much prayer and discussion, my parents and I determined that Woodward seemed to be a good place for me to explore.

Of course I was skeptical to make the switch due to the fact that I would be transferring for my 11th grade year. Who does that?! Everyone tells us how your junior year of high school is the hardest and that it also is the most important year as it relates to college. But I felt strongly that I did not want the rest of my high school tenure to be like the previous five years. I was leaving a school where everyone knew me. I had gained the respect of teachers and the administration. I had monthly lunches with the headmaster, and I had been a varsity athlete since the ninth grade. At Woodward, I would have to re-establish myself in an entirely new community.

I tell you this story because it directly relates to the importance of a school like Woodward Academy. On this journey, I have come to find out is that there are very few private schools in the country that can compete with the dynamic combination that Woodward displays—a high level of academics and a real world social experience. Woodward's academic rigor is well known throughout the state and the country, as evidenced by the amazing schools to which my peers have been accepted. Colleges clearly look highly upon students from Woodward. What is sometimes overlooked when we focus on the Academy's academics and its athletics is that Woodward is a hidden gem. The administration has created an intentional community. The confluence of students of diverse ethnicities, socioeconomic backgrounds, thought, and religion is the true barometer of this school's esteemed position in this city. There are few private schools in the Atlanta surrounding area that can boast a student population as diverse as this. Woodward is a microcosm of what the rest of the world looks like.

Some consider this period a post-racial society, yet James Baldwin and others point out how often we tend to disregard or fail to understand the things we don't personally relate to. Thus it's human nature at times to marginalize groups of people according to race, gender, religion, culture, sexual orientation, and the list goes on. Therefore, we might tend to be unjustifiably suspicious of and threatened by someone with a Middle Eastern name—or even by a 6'6" young, black man simply out for a nighttime jog around the neighborhood. On a personal level, the way my sixth grade friends failed to "see" me, is the same way that marginalized groups are "not seen" on a daily basis. For me, it is simply a matter of asserting the importance of exposure to diverse experiences and recognizing the value therein.

I will be attending the University of Chicago to play basketball and study economics and international business as these areas of study embody the same principles that I thrive on—social interaction, serving others, and global awareness. So, to my Class of 2017, in order to help affect change in our global community, it is our obligation to help create global unity by understanding the cultures and backgrounds of others.

My experience at my former school did change me, but it also piqued an awareness of others that has broadened thanks to my time at Woodward. It is my goal to challenge people to take the protection of every human's rights personally and empower those who feel as if they are not seen. I can honestly say that choosing to come to this school was one of the best decisions I have ever made. The relationships garnered in a short span of two years have been genuine and I am confident will be lifelong, assuming what happens in Cancun stays in Cancun...

Once we leave the walls of the Academy, each of us will be prepared to enter a 21st century global community. Business is no longer being done from coast to coast, rather, continent to continent. And as Woodward alumni, we will be able to navigate these differences with ease.

So as I conclude, President Gulley's words ring true. I do feel as if my experience here has been unexpected and truly transformative. As we transition from high school to college, we will all encounter unexpected events. It is a matter of how we react to and learn from these events that show us who we shall become. So, I implore you to reject apathy and ignorance and join me as we explore what's going on in the rest of our world. Learn from others. Question theories and laws. Challenge yourself, and enjoy every minute of difficulty. Don't be afraid to step into an unexpected circumstance, because, you never know, it may transform you into an agent that can change the world. Thank you."