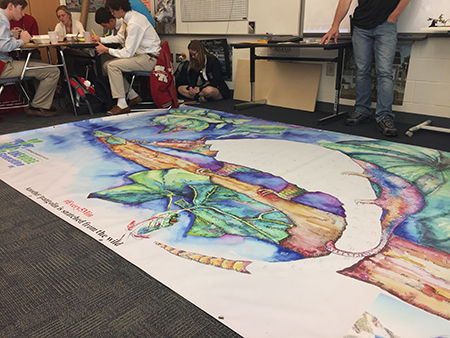 Two students in Woodward's Upper School Environmental Studies course have taken on a Pangolin Awareness Project as part of a unit focused on natural resource conflict and exploitation in Africa. Pangolins, native to Africa and Asia, are poached for their keratin scales that are ground up and used in many traditional Chinese medicines. Beyond the Gate sat down with the students to learn more about pangolins, the world's most trafficked mammal, and their project.

Miranda Levin '18: I first learned about the pangolins during environmental science. The class was doing a project on exploited African resources, and Katie and I were doing Land Grabs. We were not very interested in the project so we switched with the group that was doing pangolins because they were not very interested in them. As we researched the pangolin, it became evident that these defenseless little creatures needed our help.

BG: What motivated you to take on the Pangolin Awareness Project?KR: At first, my African conflict project was going to be on the land grabbing issue. But when I saw a picture of the pangolin and heard what was happening to them all over the world, I was drawn to the issue, so I changed my project.

ML: The pangolin fascinated me and I thought it would be worthwhile to try to spread awareness. I love animals and before this project, I had never heard of pangolins. That is a sign that there needs to be awareness raised.

ML: That they roll up into a little ball when they are scared!BG: What is one fact that you believe everyone should know about pangolins?KR: The most shocking and important fact I have heard about the pangolin is that every five minutes a pangolin is poached. That amounts to 288 pangolins taken every single day.BG: In what ways will you be creating and spreading pangolin awareness amongst your peers at Woodward?KR: Within the next few weeks we will be starting the second part of the pangolin awareness project, which is a Flat Pangy project. It is a replica of the worldwide Flat Stanly project and the kids that we get involved will write facts about the pangolin and send it to one of their family members so that more people learn about this little known and endangered mammal. BG: What can others do to help protect the endangered status of pangolins?KR: The first step is to make people aware that pangolins exists. Very few people know what a pangolin is, and often times when one says pangolin, people hear penguin.

ML: Talk about pangolins! Most people do not know that they exist. Raising awareness will cause people to demand change. BG: What are you two interested in studying in college?KR: I hope to get my masters in youth special education.

ML: I hope to study early or primary childhood education at college.