"Lost Boy of Sudan" Visits Woodward for Week of Understanding 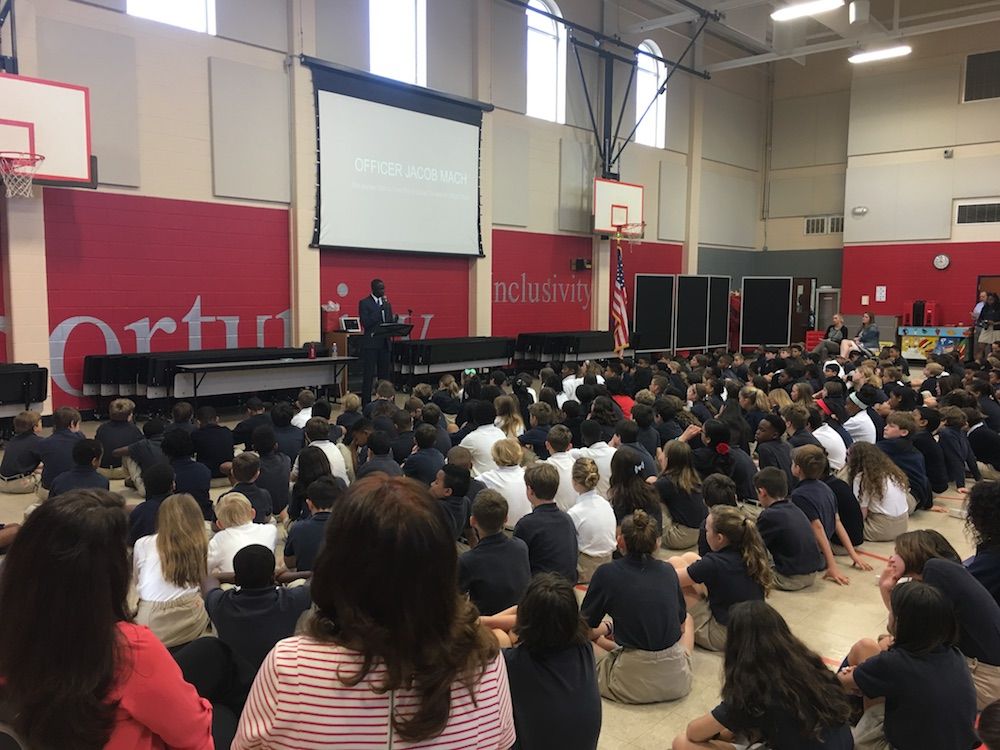 Embracing diverse perspectives and backgrounds is the fabric of the Woodward community and a deliberate part of the student experience each and every day. Every year, however, the Week of Understanding provides a special opportunity for Woodward faculty and students to celebrate Woodward's diversity and learn about issues relating to a specific theme. The year's assemblies, speakers, and activities centered around the theme "Home." From a donation project for the homeless to a visit from a former "Lost Boy of Sudan," this year's Week of Understanding sparked important conversations and expanded horizons at all five schools. (See the full listing of events).

Mr. Jacob Mach's visit to the Lower School was one outstanding event in this year's Week of Understanding. Not only is Mr. Mach an Atlanta police officer and a Woodward parent (fourth grader, Mach Mach), he's also one of the "Lost Boys of Sudan" who grew up in Sudanese, Ethiopian, and Kenyan refugee camps.

Mr. Mach told a rapt LS audience about his journey, which began when he was forced to flee civil war in what is now South Sudan. As a 7-year-old, Mr. Mach made a two month, barefoot journey during which many friends and fellow Lost Boys died of exhaustion, starvation, and dehydration. Perhaps even more terrifying, many also died of violent onslaughts by their persecutors and attacks from lions and crocodiles. (Continued below)

See Photos from the 2017 Week of Understanding

Somehow Mr. Mach survived, but his journey did not stop there. After four years in an Ethiopian refugee camp, Mr. Mach was displaced again by civil war. Another harrowing journey ensued, this time back to Sudan, then on to Kenya, where he eventually landed in a refugee camp and--at 12-years-old--began elementary school.

In 1999, Mr. Mach was one of approximately 4,000 Lost Boys to qualify for resettlement in the United States. It was Mr. Mach's grit and perseverance that ultimately led to his success in America. And indeed, his successes are many: As of February 2017, Mr. Mach became an Atlanta police officer and he's grateful for the chance to give back to the community, especially the opportunity to work with homeless veterans. "If I can make it, you can!" he tells them.

Lower School students listened carefully to Mr. Mach's story and were still absorbed as he ended his presentation saying, "You go to the best school in the state; you have the best, most caring teachers; the best coaches; the greatest chance to learn; the best opportunities. It is up to you to succeed. But you have to follow the rules and respect everyone." For the fourth, fifth, and sixth graders in the audience, it wasn't just another adult telling them how to behave, or even another Woodward parent giving advice. The message to embrace all of Woodward's opportunities while fully respecting everyone had a special significance coming from Mr. Mach, whose incredible, perilous journey and will to succeed are lessons to us all.
*For more on Mr. Mach's visit, see WSB's coverage of the Lower School's assembly in this story, which aired on multiple newscasts on Wednesday, March 30.

Please note that we will continue to update the slideshow above through Friday, March 31.