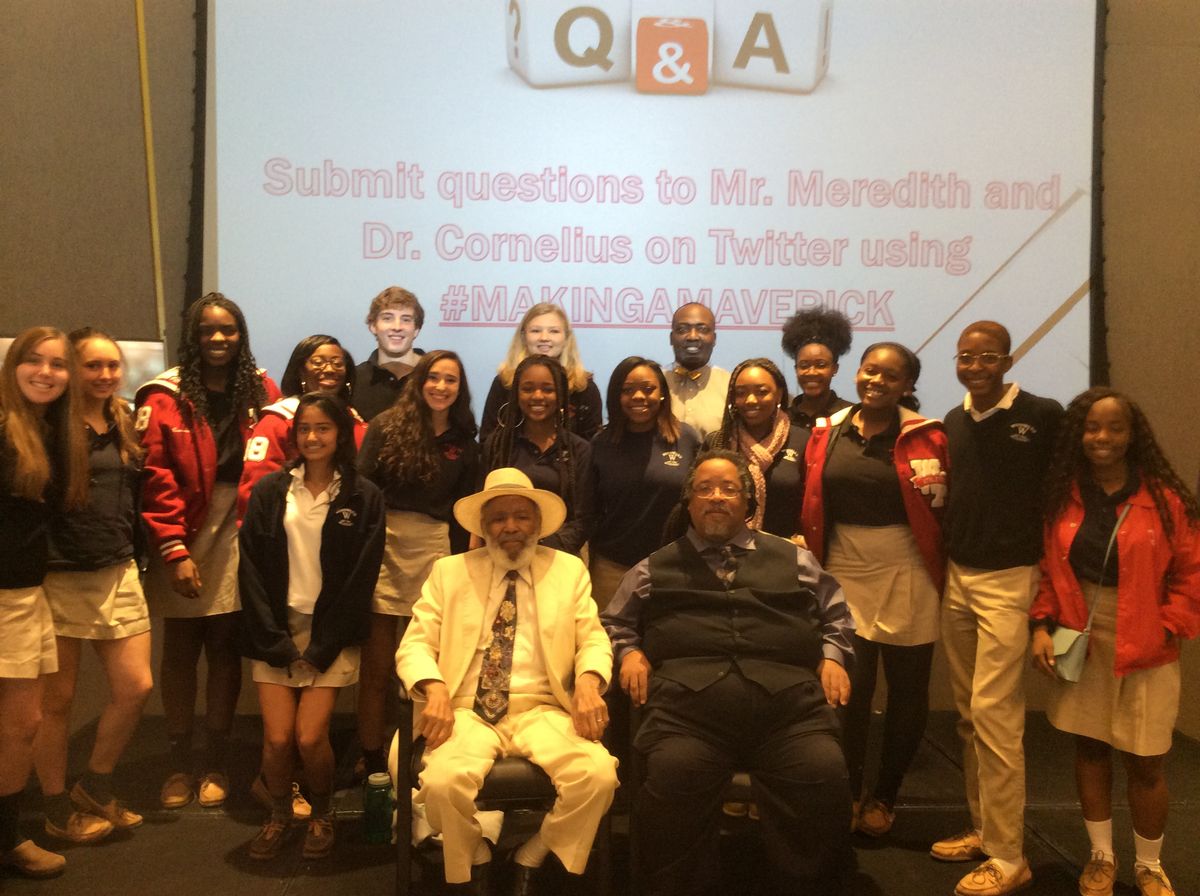 I believe students learn best when history comes "alive" by students participating in their own narrative or interacting directly with those individuals who made history. These interactive lessons are so much more meaningful and memorable for students than any lecture I give or homework reading I assign.

On October 26, the "Landmark Supreme Court Cases: Civil Liberties" class and the leadership of the Black Student Union went to the National Center for Civil and Human Rights to hear from one of the icons of the Civil Rights Movement, Mr. James Meredith.

One of the cases we study in "Civil Liberties" is Brown v. Board of Education, which, in 1954, constitutionally ended the "separate but equal" doctrine in publicly-funded education. However, many schools in the segregated south still had not desegregated their public schools nearly a decade after the ruling, including the University of Mississippi. Enter: James Meredith. By attempting to matriculate at "Ole Miss," Mr. Meredith tested the fortitude of the U.S. government's enforcement of the Supreme Court's ruling in Brown.

The students in my class and in Woodward's BSU were prime candidates to take advantage of interacting with a living legend like Mr. Meredith, who risked his life so students like those at Woodward may be able to enjoy more freedoms. Hearing from Mr. Meredith enhanced my students' understanding of Brown and its aftermath. He spoke on a variety of topics, including his life, the Civil Rights Movement, and the future of advocacy.

What stood out most to me, as it related to Woodward students, was when he said that the future of Civil Rights, equality, and the voices of advocacy belong to the young people. It is the young people's charge now to carry the mantle of equality and justice for all. It is their charge to control their future, their own narrative, especially as it relates to the media. That resonated with me and hopefully it inspired the students as well.

We so often hear stories from the civil rights era, but getting the perspective of someone who not only lived during that time, but was also an activist, is so much more meaningful. Being able to listen to civil rights icon James Meredith left me in awe, and reminded me that the era of Jim Crow and segregation is not as long ago as we would like to believe.

I hadn't heard of Mr. Meredith until Mr. Jackson invited the BSU leadership to hear him speak. After learning about Mr. Meredith's decision to enroll at the University of Mississippi, a completely segregated institution at the time, and the social uproar that followed, I was excited to hear his personal take on the situation. While he did not elaborate much on his version of events or how the ordeal affected him, he did talk about activism today and how we could get involved as students, and he also shared some stories from the 50s and 60s.

One particularly memorable moment was when Mr. Meredith revealed the true story behind an infamous photo of him that was taken in what seems to be a totally empty classroom at the University of Mississippi. The popular narrative behind the picture is that all the white students got up and left the room as soon as Meredith sat down, but he revealed that the picture was actually cropped to exclude a number of white students who were also sitting in the classroom. I found this interesting because it reminded me how easily facts can be misconstrued throughout history, and that everyone should remain educated on important topics like our nation's civil rights history.

The entire experience was very cool, and I'm glad I got to meet someone who was so influential in fighting for civil rights. His words made me reflect on the immense progress that has been made in a relatively short span of time, and the role that my peers and I will play in continuing the legacy created by Mr. Meredith and other civil rights activists.

Share to FacebookShare to TwitterShare to LinkedInShare to EmailPrint this page
Brian Jackson and Nija Packer
Nov 2 2017
Share to FacebookShare to TwitterShare to LinkedInShare to EmailPrint this page
Beyond the Gate: The Woodward Academy Blog is a gathering place for our community members to share all of the remarkable things happening at Woodward in the classroom and beyond. Our talented faculty and staff will share their ideas and philosophies as well as news about the programs and activities that make the Academy special. We’ll also hear from students, alumni, parents, and other members of the War Eagle family. We invite you to explore and share your comments! Would you like to be a BTG blogger? Email marcom@woodward.edu.
Recommended Reading from our WA Librarians
Urban Recipe and Woodward Combine to Feed Those in Need
1 Day for WA: Alumni Rally to Support our School on Graduation Day
Woodward Alum Fights on Pandemic Frontlines
Congratulations to the Woodward Academy Class of 2020!
#woodwardway
Social Stream