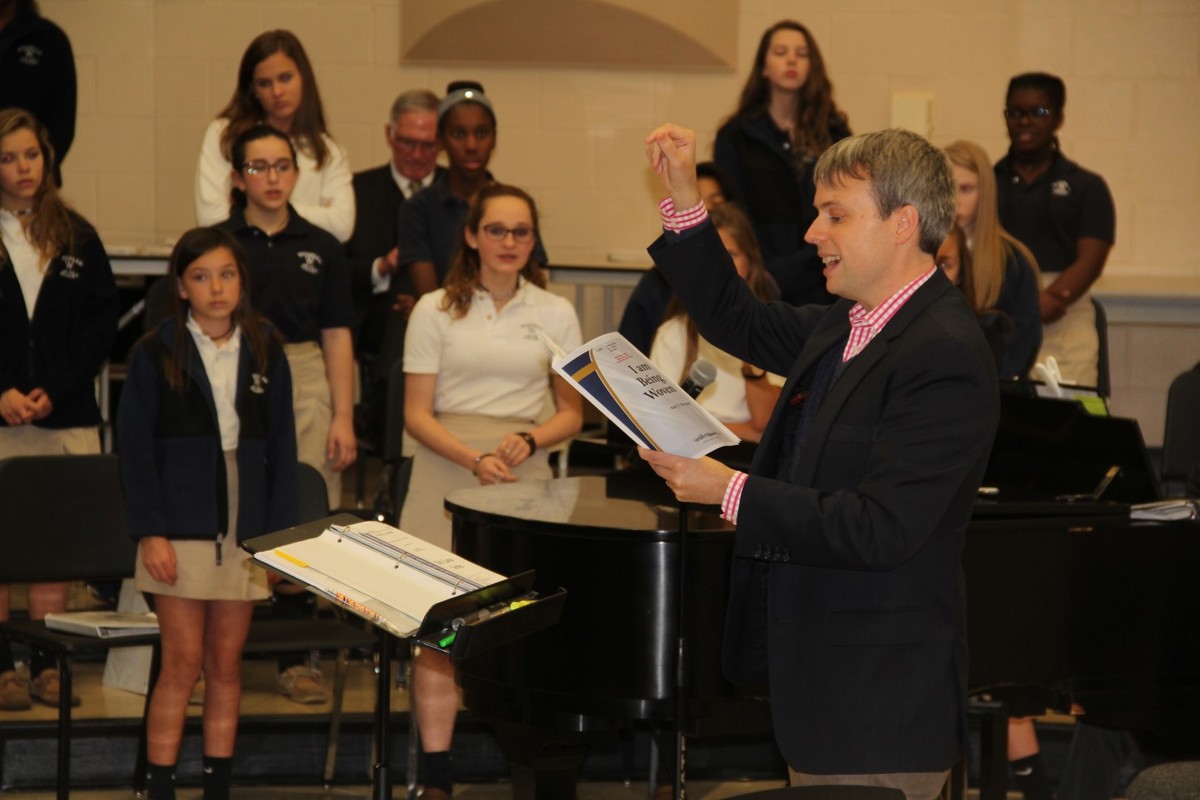 The voices of the Middle School girls in Suzanne Woodruff's large choir class came together to make a big and beautiful sound. During a recent visit from from Matthew and Carolyn Guard, of the Skylark Vocal Ensemble, the young singers got some valuable coaching from a conductor who works with professional vocalists all over the country.

The experience provided the students with a window into careers in professional music. "I'm proof that you can pursue a career in music," Matthew told them. "If you're passionate about music now at your age, don't think that you have to give it up." 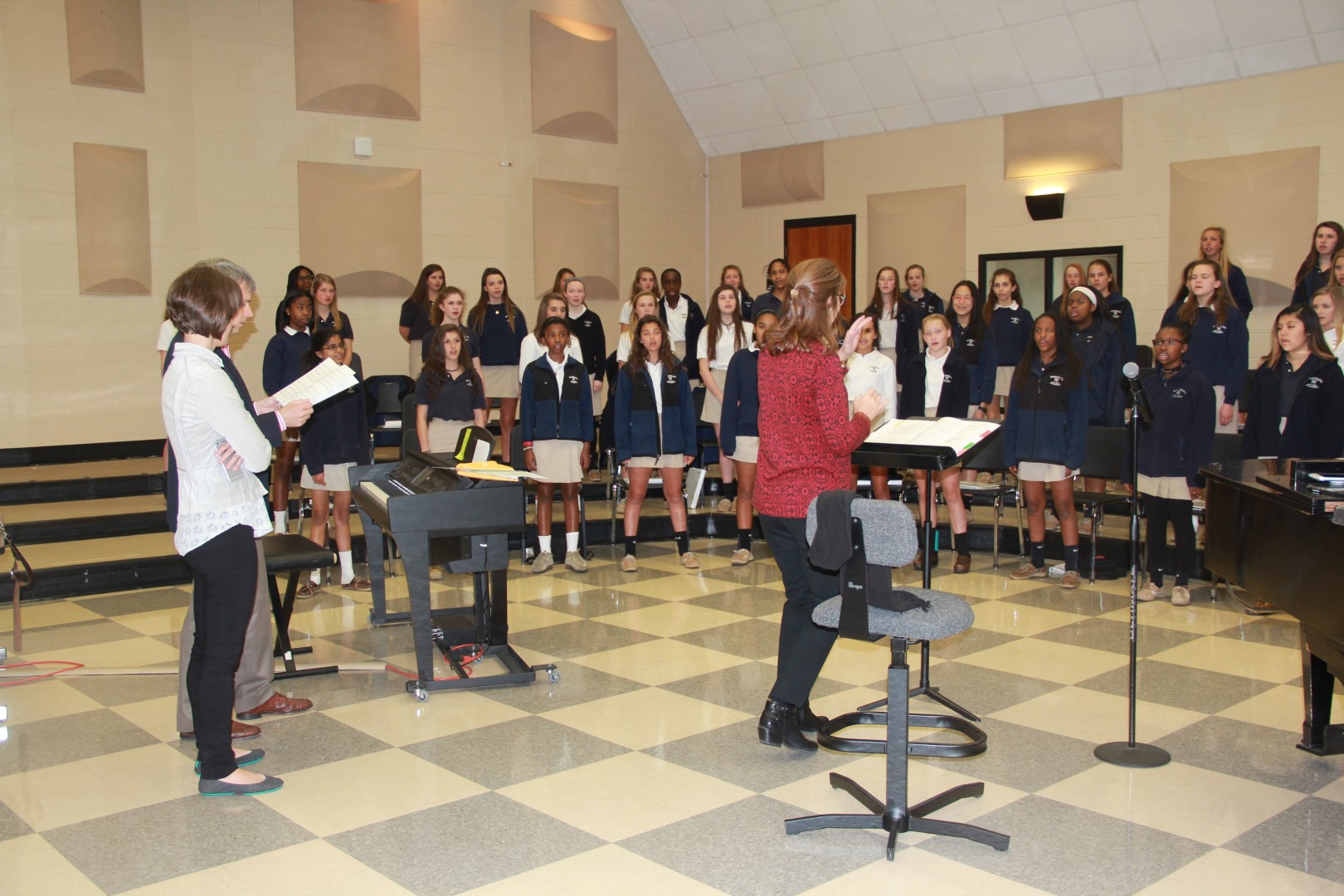 Matthew and Carolyn met at Harvard, where they both sang in the University Choir. After graduation, they married and moved to Atlanta, earning their MBAs at Emory. Both went to work for management consulting firms, Matthew with Bain & Company and Carolyn at McKinsey. They joined the choir at St. Philip's Episcopal Cathedral, Carolyn as a staff singer.

But how to pursue their shared passion while forging careers? "A degree from Harvard is a great thing, but it did not teach us the

foundations of business," Matthew says. "Both of of us learned a lot at business school, and looked on our time in consulting as practical training. We always had the idea that we would do something more entrepreneurial, and I wanted to get back into conducting. I just didn't know how."

Things came together when friends approached them with a business idea: making aviator-style sunglasses for kids. Their company, Babiators, was born. As Carolyn focused on the business, Matthew found a way back into conducting. He went part-time at Bain (working three months on, three months off) so that he could build the musical program that became Skylark. A project-based vocal ensemble, today Skylark works with professional singers to stage programs and concerts. The ensemble grew from one or two performances a year to a full season of five to six projects, 15 performances a season on the stages of Carnegie Hall, Lincoln Center, Boston Symphony Hall, the Atlanta Symphony, and Spivey Hall. The ensemble has staged innovative projects, including a recent work at MIT in which Skylark used music to explain mathematical concepts and a performance alternating Civil War songs with compositions from Nazi-occupied France, based on the Resistance poetry of Paul Eluard.

At Woodward, Matthew and Carolyn spent a day working with students in Suzanne Woodruff and Stephen Rotz's Upper and Middle School choirs and an evening in rehearsal with the Camerata ensemble, conducting students through their repertoire and providing valuable advice and feedback. After a session with the Middle School choir, Matthew came away impressed with Woodward's young vocalists. "They are surprising in two ways--they are fantastically well-trained and musical, and they are super engaged and into it." 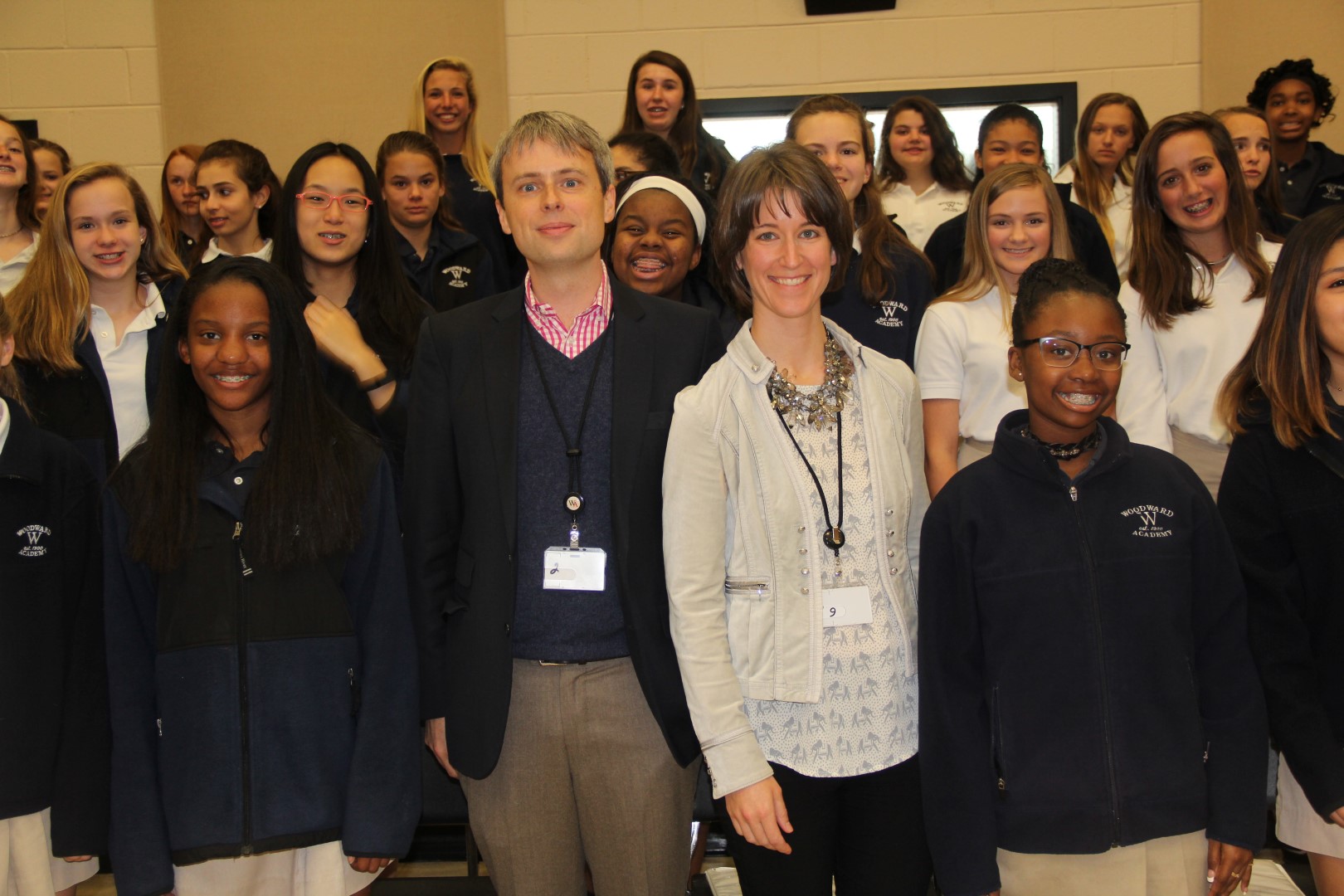 The Guards' visit was support by the H. Bruce McEver '62 Visiting Artists program, which brings professionals to campus each year to enrich students' experiences in the arts. Mr. McEver founded Berkshire Capital in 1983. He holds degrees from Georgia Tech, Harvard Business School, and Harvard Divinity School.