STEM Collaboration Across Grades in the Woodward North Eaglesphere 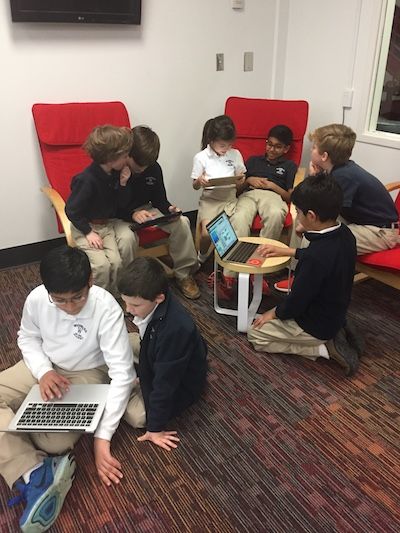 Everyone can enjoy the STEM challenges, excitement, and fun of game design. In Woodward North's Eaglesphere, sixth grade eagles recently invited some second grade eaglets to join in the fun and try out a game they designed in their STEM class.

As teacher Debbie Stephens describes, the game the sixth graders invented—"Flappy Bird"—involved many stages of planning and execution, and called on students to be "creative and thoughtful about what 'events' would be options for their game." After the kids had put their games through a peer-testing phase, they invited a second grade class to come try them out. 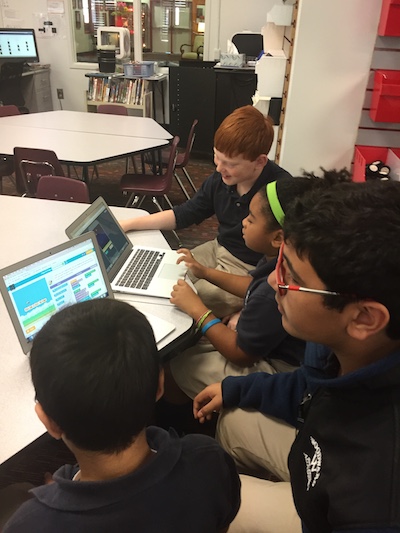 As Ms. Stephens reports, "Many of the younger students wanted to learn how to use the code to make changes and the sixth graders were thrilled at their enthusiasm. One sixth grader said he couldn't believe how much fun it was to share and watch the little ones learn so quickly."

The second graders may not have realized it, but they also were helping the sixth graders with their design process. As Ms. Stephens describes, "After the second grade left, we met as an engineering design team to review our feedback from our players. We discovered they wanted more opportunities to earn points and they loved it when the scenery changed."

Ms. Stephens tells us the sixth graders are excited to use their coding experience to make the suggested changes. They are especially encouraged by the ever-eager second graders who are chomping at the bit to visit the bigger kids again and play more games!
Share to FacebookShare to TwitterShare to LinkedInShare to EmailPrint this page
Beyond the Gate Editors
Feb 17 2017
Share to FacebookShare to TwitterShare to LinkedInShare to EmailPrint this page
Beyond the Gate: The Woodward Academy Blog is a gathering place for our community members to share all of the remarkable things happening at Woodward in the classroom and beyond. Our talented faculty and staff will share their ideas and philosophies as well as news about the programs and activities that make the Academy special. We’ll also hear from students, alumni, parents, and other members of the War Eagle family. We invite you to explore and share your comments! Would you like to be a BTG blogger? Email marcom@woodward.edu.
Recommended Reading from our WA Librarians
Urban Recipe and Woodward Combine to Feed Those in Need
1 Day for WA: Alumni Rally to Support our School on Graduation Day
Woodward Alum Fights on Pandemic Frontlines
Congratulations to the Woodward Academy Class of 2020!
#woodwardway
Social Stream