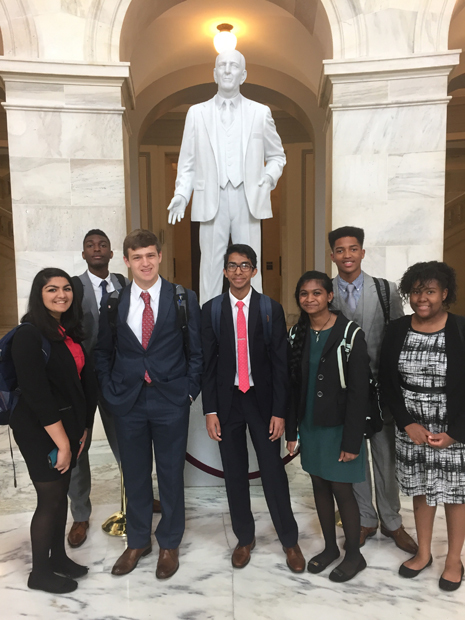 High school debaters are often regarded as the nation's future political leaders — and for good reason, as many politicians and policymakers begin their careers as bright (and often awkward) teenagers on high school debate teams. But high school debates are typically confined to classrooms and hotel meeting rooms, far from the hallways of Congress where the policies being debated are actually formulated.

This week, members of the Woodward Academy debate team got a chance to bridge that gap by participating in a series of public debates about surveillance policy hosted by the Judiciary Committee of the U.S. House of Representatives. Organized by Access Now (a non-profit public policy and advocacy organization that campaigns for a free and open internet) and the National Speech and Debate Association, the debates showcased the knowledge and skills students accumulated over nearly a full year of intensive research and diligent preparation.

Woodward debaters — along with 20,000 other students from across the country — spent the 2015-2016 school year debating U.S. domestic surveillance policy. They grappled with the difficult issues brought to the public's attention in the summer of 2013 by National Security Agency whistleblower Edward Snowden: How can privacy and security be effectively protected in post-9/11 America? How can the Fourth Amendment's core values be maintained in a digital (and globalized) world? Does mass surveillance really make America safer? At what cost to civil liberties, the health of our technology industry, the security of our cyber infrastructure, and the strength of our relations with European allies? How can effective oversight be established over the activities of secretive U.S. intelligence agencies? What is the proper role for the courts and Congress in regulating the executive's surveillance programs?

Students began researching these and other surveillance-related questions last June. As Congress debated (and eventually passed) the USA Freedom Act, many debaters began their preparation at rigorous summer debate institutes, where the sessions lasted as long as seven weeks. To succeed in policy debate, students must engage in a "deep dive" that involves immersing themselves in books, scholarly journal and law review articles, think tank publications, congressional testimony, popular press articles, and more. It is not enough to know surface-level details of the policies being debated; debaters need to become experts in the field, capable of defending the best arguments on both sides of the topic against well-prepared (and highly motivated) opponents.

Over the course of the season, students engage in dozens of intense two-hour debates. To win, they must marshal the best evidence from experts in the field, synthesize it into persuasive rhetorical packages, anticipate and then effectively refute opposing arguments, and constantly adapt and revise their arguments to convince a neutral judge to vote for their side of the proposition — all at very high speeds and under extreme time pressure. And as the season progresses, students must keep pace with the latest news — like the European Court of Justice's ruling in Schrems and the subsequent negotiations over the U.S.-EU Privacy Shield or the heated legal battle between the FBI and Apple over the appropriate scope of the All Writs Act and the importance of end-to-end encryption — and adapt their arguments accordingly. It's very challenging, but the resulting debates are incredibly sophisticated.

This year's topic — Resolved: The United States federal government should substantially curtail its domestic surveillance. — drew the attention of The Intercept's Jenna McLaughlin, a reporter who covers surveillance issues for the publication co-founded by Glenn Greenwald, a former policy debater whose work on the Snowden documents earned him a Pulitzer Prize. After interviewing several debaters and their coaches (including Woodward's Bill Batterman) and attending the Southern Bell Forum at Montgomery Bell Academy, McLaughlin published a lengthy profile of high school debate called "The Unblinking Eye: High School Students Debate Surveillance in Post-Snowden America."

McLaughlin's conclusion — "If you're looking for an intense, thoughtful, and detailed discussion about the U.S. government's power to spy on its own citizens, you won't find it in Congress. But you will find it in high school classrooms all across the country this year." — inspired Access Now to organize a showcase at Congress. The House Judiciary Committee agreed to host the event in one of their hearing rooms in the Rayburn House Office Building, the same hallway where the USA Freedom Act was initially marked up and debated in 2014 and where the Email Privacy Act was just recently debated (and where future discussions of important surveillance issues like FAA Section 702 Reauthorization and Rule 41 will be held).

The response from the audience — which included fellow competitors and coaches, representatives from Access Now, McLaughlin, Congressional staffers, and even a few pop-ins from members of the Judiciary Committee — was very positive. Nathan White from Access Now, the organizer of the event, tweeted "These HS kids debating mass surveillance are amazing."

The day's events were chronicled on Twitter: @CongressDebates and @WoodwardDebate. Audio and video recordings of the debates are available from Dropbox.

Share to FacebookShare to TwitterShare to LinkedInShare to EmailPrint this page
Bill Batterman, assistant debate coach
May 27 2016
Share to FacebookShare to TwitterShare to LinkedInShare to EmailPrint this page
Beyond the Gate: The Woodward Academy Blog is a gathering place for our community members to share all of the remarkable things happening at Woodward in the classroom and beyond. Our talented faculty and staff will share their ideas and philosophies as well as news about the programs and activities that make the Academy special. We’ll also hear from students, alumni, parents, and other members of the War Eagle family. We invite you to explore and share your comments! Would you like to be a BTG blogger? Email marcom@woodward.edu.
Recommended Reading from our WA Librarians
Urban Recipe and Woodward Combine to Feed Those in Need
1 Day for WA: Alumni Rally to Support our School on Graduation Day
Woodward Alum Fights on Pandemic Frontlines
Congratulations to the Woodward Academy Class of 2020!
#woodwardway
Social Stream