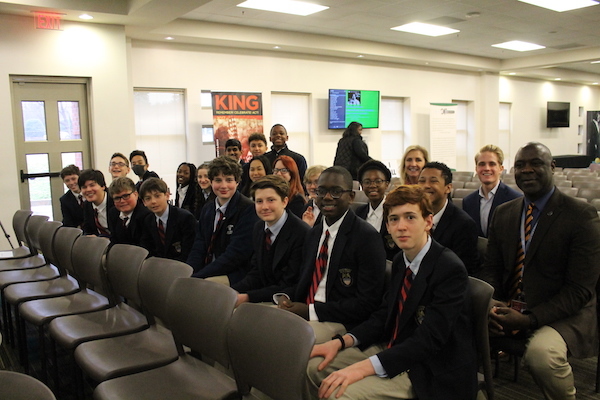 Last weekend, the Social Studies Club kicked off Martin Luther King weekend by attending a program called Celebrate Difference with 50 Acts of Kindness. The Woodward Academy club was one of a select number of groups invited from nine counties around the world. They were in the front row to hear from three icons: Hank Thomas, one of the remaining Freedom Riders; Dr. Bernice King, daughter of Dr. Martin Luther King; and Isaac Newton Farris, nephew of Dr. King.
Additionally, Woodward Academy Senior, Henry Cox, introduced and interviewed Dr. Bernice King. "He did an amazing job and represented our school brilliantly," says Ms. Paula Crawford, 7th grade World Cultures teacher and Social Studies Club advisor. "All panelists gave personal and very inspirational messages to the students."

"I had the distinct honor of introducing/interviewing Dr. Bernice King last week," Henry said. "My goal for the day was to get a picture with Dr. King, but I soon realized that I had set my goal way too low. She is a dynamic speaker, with a firm grasp of history and so many plans for the future. I received a lot more than a picture of a civil rights icon, I received inspiration!" 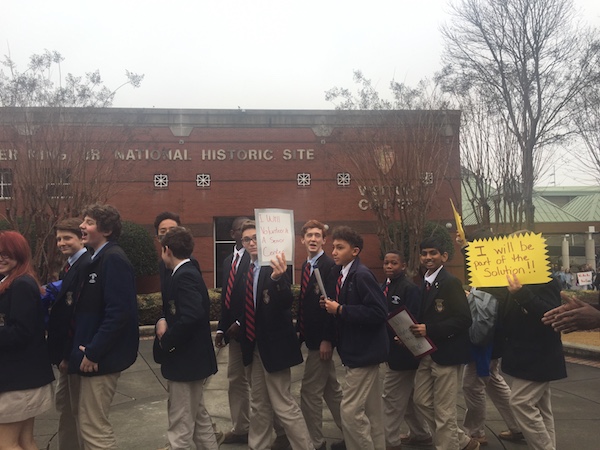 Then, the students had a break-out session where they were introduced to Non-Violence 365, a philosophy based on Dr. King's work which trains participants in non-violent protest. "In our session," describes Ms. Crawford, "we focused on the six principles of a non-violent lifestyle, as well as on the fact that non-violence is a choice. The students were impressed by the fact that non-violence really is only for the courageous, because--as history has shown--there can be risks associated with it."
The students then participated in a March for Kindness, which was designed to introduce students to the idea of protest and the idea that it requires advanced planning and even training for all participants to ensure the right images and messages are conveyed.
The Social Studies Club is a cocurricular group that meets once a month after school. Their activities include: celebrating holidays around the world, encouraging the study of geography with the National Geography bee, leading the school in Black History Month activities, playing board games from around the world, and attending the Georgia Renaissance Festival in the spring.
Share to FacebookShare to TwitterShare to LinkedInShare to EmailPrint this page
Beyond the Gate Editors
Jan 19 2018
Share to FacebookShare to TwitterShare to LinkedInShare to EmailPrint this page
Beyond the Gate: The Woodward Academy Blog is a gathering place for our community members to share all of the remarkable things happening at Woodward in the classroom and beyond. Our talented faculty and staff will share their ideas and philosophies as well as news about the programs and activities that make the Academy special. We’ll also hear from students, alumni, parents, and other members of the War Eagle family. We invite you to explore and share your comments! Would you like to be a BTG blogger? Email marcom@woodward.edu.
Recommended Reading from our WA Librarians
Urban Recipe and Woodward Combine to Feed Those in Need
1 Day for WA: Alumni Rally to Support our School on Graduation Day
Woodward Alum Fights on Pandemic Frontlines
Congratulations to the Woodward Academy Class of 2020!
#woodwardway
Social Stream